Star is an important part of Christmas decorations. So here are some tips on how to make star at home.
Christmas » Christmas Decorations » How To Make Christmas Star

How To Make Christmas Star

Christmas star is one of the most significant emblems of Christmas celebrations. A Christmas tree is considered deficient without a twinkling Christmas star sitting brightly on its top. It is used to decorate homes, cribs, cards, and various other things. Traditionally, the Christmas star symbolizes high hopes and high ideals that can be simplified as hope for good fortune and happiness, and joy for the entire humankind. The star is seen as an extraordinary symbol to mark the birth of Jesus Christ. Whether you consider this Christmas star a traditional decorative ornament or a symbol of joy during Christmas, it has some very interesting and historic stories relevant to its existence. These stories vary according to the ideologies and beliefs of various cultures around the world. 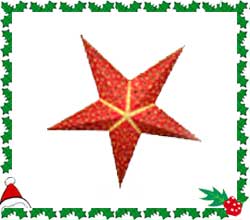 This Christmas Star is mostly referred to as the Star of Bethlehem. It is believed to be the same star which revealed the birth of Jesus to the Magi or the 'Three Wiseman'. Besides revealing the birth of Jesus, this star also led the Magi to Bethlehem, where they paid him homage, worshipped him, and blessed him with gifts. However in some cultures, this star is regarded as the symbol of Satan's instrument while some theologians claimed that the star fulfilled a divination that is referred to as the Star Prophecy. Although many contemporary astrologers made several attempts to link it with various heavenly objects like comet, planet, nova, or conjunction, but some believe that it was a fiction that was created by the author of the Gospel of Mathew. However, the Biblical account recommends that the visit of the Magi or 'Three Wise Men' took place several months after the birth of Jesus Christ.

Till today, many Christian people prefer to believe the miraculous appearance of this holy star throughout the world. For them, their holiday is considered to begin with the appearance of the first star on Christmas Eve. Following a similar tradition and belief in Poland, a special Festival of Star is held right after the Christmas Eve meal. During this ritual, the village priest acts as the 'Star Man' and tests the knowledge of village children about their religion. However, in Alaska, boys and girls of the village carry a star-shaped figure in their hands and wander from house to house singing carols and receiving treats in return. In Hungary, carving star shaped pattern on the half of an apple is believed to bring good luck in the coming year.

Things Required
How to Make
To enhance your Christmas star decorations, we present you a lovable and charming poem. Take a look!

Christmas Star!
A diamond shines no brighter
Than that lovely Christmas star.
It shines in all its brilliance;
It's seen from near or far.
A symbol of the Christ child
As He lay upon the hay,
It tell to all the waiting world
A King was born that day.

O Bethlehem Star keep shining -
Give us faith and hope and love.
Keep our thoughts forever turning?
To the Savior up above
Give us strength and hope and courage
To do our best by far
And never falter in our faith
As we watch that Christmas star....