The origin of mistletoe dates back to the Pagan origin. This article tells you about its role as a Christmas flower.
Christmas » Christmas Flowers » Mistletoe

Mistletoe is a botanically interesting plant with parasitic properties. It grows on the branches of other trees from where it hangs down from its roots which penetrate into the tree and extract nutrients from it. Mistletoe plants are of two types. One type is found in North America and lives parasitic on trees. The other type is Viscum album and is found mainly in European regions. Viscum album is a green shrub with small, yellow flowers and white, sticky berries. It is mainly found on apple and oak trees. The oak tree mistletoe is considered rare and special. Greeks and Germans considered this plant to have mystical powers and with time, it became a part of many folklore customs. These traditions and customs were passed on to America through immigration and settlement. 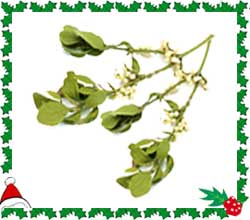 Mistletoe is considered sacred and magical in European folklore. It was believed to bring life and fertility due to its aphrodisiac properties and protection against poison. Mistletoe was said to be the "soul" of oak tree. It used to gather in winter and summer solstices for its sacred significance. The custom of using mistletoe in decorating houses has its roots from the Druid and old Christian customs. In middle ages, the custom of hanging branches of mistletoe from the ceiling was followed that was considered important for warding off evil spirits. In Europe, mistletoe was kept over houses and stable doors to scare away witches. To add on, oak mistletoe was believed to extinguish fire.

There is another popular custom associated with mistletoe that is rooted back to the Greek festival of Saturnalia. In Scandinavia, mistletoe was considered as the "Plant of Peace" and enemies used to truce under it. In the 18th century, English people added a new dimension with the custom of kissing ball. A young lady standing under the kissing ball on Christmas day could not refuse to be kissed. Kissing under the kissing ball symbolized deep romance and goodwill. It was believed that if a girl is left out from being kissed, she will not get married in the following year. Following the old pagan traditions, there are many parts of Europe where this custom is still prevalent. This custom is also prevalent in Canada. Exchanging kisses under mistletoe is a promise to marry and a hope of happiness and long life. These days, kisses can be exchanged under mistletoe on any day of the festive season.