Xmas cakes are quite yummy and an important dessert of Christmas. To know more about Xmas cakes, go though this section.
Christmas » Christmas Recipes » Xmas Cakes

When melodious sounds of bells are heard in the streets with "Ho! Ho!" of Santa Claus, a feeling of immense happiness magnifies in our hearts. On the arrival of Christmas season, the letter boxes of all houses are filled with numerous party and get-together invitations. You plan one to rendezvous with friends and family. Any Christmas party is incomplete without a variety of lip-smacking foods followed by delighting desserts. There are various desserts associated with Christmas, out of which Xmas cakes are ultimately delicious and a traditional dessert of this holy festival. The tradition of Christmas cakes is basically an English tradition which actually commenced as plum porridge. People used to fast the entire day on Christmas and break it by eating the porridge on Christmas Eve. Soon some other ingredients were added to this porridge, such as dried fruits, spices, and honey to give it a different variety. Subsequently, this porridge became a Christmas pudding. 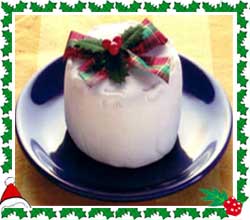 Oatmeal was one of the original ingredients of the porridge which was excluded from the recipe in the 16th century. This was replaced with butter, wheat flour, and eggs, which promoted a good hold of the mixture together and came out as a boiled plum cake. The richer families with ovens in their houses started cooking fruit cakes with almond sugar paste on Easter. On Christmas too, they made a similar cake using ingredients, like seasonal dried fruits and spices. This cake was named as Christmas cake. There are many methods to make Christmas cake but all of them are cooked with some variation of classic fruit cake only. Christmas cakes can be light, dark, dry, moist, heavy, spongy, fermented, unfermented, etc. in nature. They are of different shapes and sizes. Christmas cakes generally have a frosting or glazing dusting of sugar on them.

All Christmas cakes are made well in advance by the end of November and are preserved in airtight tins with weekly pouring of brandy on them. Scotland's traditional Christmas cake is known as whisky Dundee and is made using ingredients, like currants, raisins, cherries, and Scotch whisky. Other Scottish Christmas cakes include apples and other fruits in them. Japanese Christmas cake is basically a frosted sponge cake, made from strawberries, chocolates, and seasonal fruit. In the Philippines, the Christmas cake is a yellow colored pound cake, containing nuts in large amounts. This cake is soaked in brandy or rum, palm sugar syrup, and water. To make it more flavorful, orange or rose water is added to the same. Check out this segment for some delicious and lip-smacking Christmas cakes.