Let's take a look at the origin and importance of Christmas candies in the section below.
Christmas » Christmas Recipes » Christmas Candies

In 1670, the choirmaster of the Cologne Cathedral in Germany devised an ingenuous way of keeping the kids quiet and still without offending the church rules and regulations by handing them sugar sticks that were shaped like shepherd's staff during the long Living Creche ceremony. These J-shaped candy canes hit off with the masses and in 1847, a German-Swedish immigrant called August Imgard, used it to decorate his spruce tree at Christmas in Wooster, Ohio. Later, red and white Christmas colors and peppermint flavors made the candy canes more beautiful to look at and tastier to eat. 1920s saw Bob McCormack working hard at pulling, twisting, and bending candy canes as a special Christmas treat for his children. 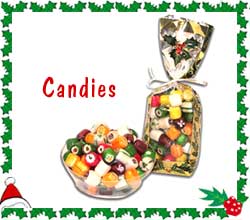 In 1950s, his brother-in-law, Gregory Keller automatized the process by inventing a machine for the candy cane production so that it could be expanded to a larger scale. Still, candy canes hold their place as one of the traditional and most favorite holiday foods and Christmas confectionary. We have noted some recipes for making candy canes and other candies, which you can try at home. The basic techniques of making candy cane involve vacuum cooking sugar and corn syrup in large kettles and then cooled by pouring it into a large bowl. Peppermint and starch is then added to it to prevent the stickiness. The mixture is kneaded till it attains a golden brown color and then, it is pulled until it becomes silky white. It is then shaped into the letter 'J'. Red stripes are added to it.

Therefore, candies and celebrations are deeply connected since ages. Also, according to human beliefs, consumption of sweets is believed to be good for establishing new beginnings and hence, they are an imperative part of all good times. Undoubtedly, 'J' shaped candies have become a strong symbol of Christmas celebrations. Whenever the word Christmas is uttered, the images of these colorful yummy candies conquer our minds. Candies are associated with happiness, pleasure and excitement; thereby, they are eternally connected with Christmas. Apart from being a part of the tradition, they bring smiles on the faces of children which are quite precious. Candies on Christmas are widely used for decorating Christmas tree. Surely, candies are a true symbol of Christmas.