Christmas is all about great food, laughs, and beautiful decorations. Christmas feast is the most awaited family gathering of the year. How about devouring a traditional Christmas pudding this Christmas? The history and origin of this traditional pudding has its roots back to the medieval times when it was prepared from meat (usually shin of beef), stewed together with raisins, currants, prunes, sugar, spices, claret, and lemon juice. However, until the 19th century, the meat was replaced with eggs, although the suet remained constant in the recipe. Traditionally, Christmas pudding is made on 'Stir Day', which is five Sundays before Christmas that probably falls on the last Sunday of November. Christmas puddings have very good keeping properties and most families keep one back on Christmas to be consumed on Easter, another significant celebration of the year. In addition, it looks very pretty when it is turned out from the pudding basin and is decorated with holly, doused in brandy and flamed. This pudding is customarily brought to the Christmas table ceremoniously and greeted with enormous gaiety and merriment. Check out the quick and easy recipe of traditional Christmas pudding below. 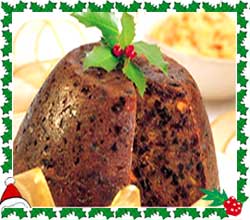