The association of Candy Canes with the celebration of Christmas have been around for centuries but until 1900 they were not found decorated with red stripes and bent into the shape of a cane. They were handed out during church services to make the children quite. One story is associated with the origin of the Candy Cane, which tells that in the year 1670 the local choirmaster at the Cologne Cathedral use to distribute sugar sticks bent in the shape of a shepherd's cane to children to make them quite during the long church services. Another legend associated with Christmas is the story of a candy maker in Indiana in the late 1800's who wanted to express the meaning of Christmas thorough a symbol in the shape of a Candy Cane. He projected several symbols of Christ's love and sacrifice through the Candy Cane. The white color of the cane symbolizes the Virgin Birth, purity and sinless nature of Jesus. The hardness of the candy symbolizes the foundation and base of churches and about our trust in God and the firmness of the promises made by God. The 'J' shape of the candies represents the name of Jesus and the shape of the staff of the 'good shepherd'. Next, he added three small stripes to symbolize the pain and torture done on Jesus before His death on the cross. There are three of them to represent the Holy Trinity and the blood shed by Christ for the welfare of the mankind. The Candy Cane symbolizes Christmas so it is made in such a way that everyone would remember what Christmas is all about. 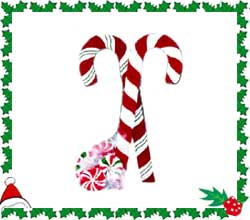 The Candy Cane looks like a shepherd's staff because Jesus is the shepherd of man. If it is turn upside down, it becomes the letter J symbolizing the first letter in Jesus' name. It is truly symbolic of Christmas celebration it reminds you of the real purpose behind the festival of Christmas. When the Europeans began using Christmas trees for decoration. Food items, such as candies and cookies, were used predominately and straight white candy sticks were one of the confections used as ornamentation. Legend has it that during the 17th century, the Candy maker created the white sticks of candy in the shape of shepherds' crooks to highlight the spirit of Christmas. As the Candy sticks were mainly used to gift the children during ceremonies but later this custom spread throughout the Europe. The popularity of the candy cane grew and it was used as treats for family, friends and relatives. Regardless, of the symbolic importance of it with the celebration of Christmas the candy cane remains a favorite holiday treat and decoration.