Santa Claus is intrinsic with Christmas and so the sleigh pulled by reindeers. Read about the association of reindeer with Christmas herein.
Christmas » Christmas Symbols » Reindeer

With the approach of Christmas season, one can hear the voices of small children singing "Santa Claus is coming to town' in every corner of the world. Surely, Santa Claus is the most loved icon when we talk about Christmas. Santa Claus was first originated with the fusion of Dutch sinterklaas, English Father Christmas, and Christmas tradition of gifting. The figure of "Santa" was developed in the 19th century in regard to the real person named St. Nicholas, who used to hand over gifts to small children. The image of the Santa Claus is usually portrayed as jovial, full of life, round, white-bearded man wearing a long red coat, white cuffed red trousers, black leather belt, and boots. Santa Claus is believed to live in North Pole with numerous magical elves and his eight flying reindeers. The image of Santa Claus's sleigh pulled by eight reindeers is as old as Santa himself. 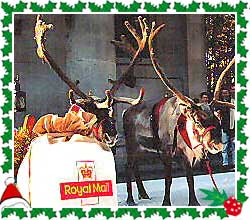 According to legends, Santa Claus rides on a vehicle dragged by eight flying reindeers, namely, Dasher, Dancer, Prancer, Vixen, Comet, Cupid, Donner, and Blitzen. These names were derived from an 1823 poem. Legend has it that Santa Claus used to make a list of every child in the world classifying them on their behaviors. Analyzing the same list, he used to decide the type of gifts to be presented to each child. He, then, used to travel on his eight-reindeer sleigh through air visiting the houses of these children and filling up the stockings with gifts and candies. These reindeers help Santa Claus in delivering a numerous gifts. Santa Claus gifts candies and toys to the good children and sometimes coal to the extremely naughty kids.

Reindeers are native to Siberia. They are good animals who are habitual of living in very cold climatic conditions. Hence, they are quite unpopular amongst people. Growing up to a height of 6 foot, reindeers are distinguished by their antlers and short legs. Reindeers are also said to be the first animal to be grazed by humans. The stories of Norse God Woden mark the origin of reindeers. According to the stories, he traveled through air with reindeers and forty-two ghastly huntsmen. Further, the popular poem "A visit from St. Nicholas" written by Clement Moore established the image of Santa Claus traveling on the magical sleigh pulled by reindeers, loaded with numerous duffels of gifts. Truly, one can imagine a Santa Claus traveling on the sleigh pulled by these eight adorable reindeers, whenever his name is recited. The reindeers, along with the gifts, bring happiness and smile on the faces of millions of people.