All of us are familiar with the significance of stockings on Christmas. When we go to shop for decorative ornaments to beautify the Christmas tree, stockings top the list. The true essence of Christmas is personified when big furry stockings are hanged near the fireplace of your home. This lovely tradition of Christmas has been practiced by people since decades. They attract kids greatly as gifts are inserted in these adorable stockings. There are numerous myths and tales, explaining the origin of Christmas stockings which primarily moves around St. Nicholas. He loved presenting gifts but did not want people to learn about his noble help offered. Some people suggest that he was too shy to give money directly to people. 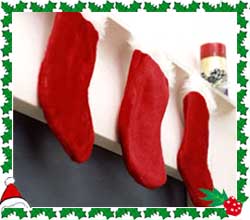 Some people even carried out theories on the items found in Christmas stockings, such as an orange discovered in the toe of stockings exemplifies a clump of gold. Finding an apple in the toe and orange in the heel suggests that you have been good all these years. Further, discovering a bunch of coal indicates that you are naughty and have hurt people in the recent times. The most excepted stories on the origin are the Dutch Theory and The Nobleman Theory. According to the Dutch Theory, the trend of hanging stockings was established in America by the Dutch. It is believed that in the 16th century, children residing in Holland used to keep clogs, filled with straw by the fireplace for the reindeer, along with a treat for Santa Claus. In return of this favor, Santa Claus used to leave gifts in the clogs. These clogs were later replaced with stockings.

Another popular story that implants the origin of Christmas stocking tradition is The Nobleman Theory. Legend has it that there once lived a nobleman, who had a wife and three daughters. The entire family was very happy but unfortunately the wife developed some lethal disease and died untimely. The gloomy nobleman cashed out all his wealth. He became very poor and had to shift in a cottage with his three daughters. Soon the daughters grew up to the marriage age. But the father was left with no money to afford the big dowry demands of boys. With the passage of time, the father got more distressed about his daughters' marriage. One fine day, St. Nicholas passed through the same village where the nobleman lived and heard people discussing about the condition of the poor father.

St. Nicholas knew that the nobleman will not accept the money directly, so he made an alternative plan and waited for the night to arrive. The same evening, the three daughters washed their clothing and hung them by the fireplace. When the sky got darker, St. Nicholas crawled through the chimney and left three bags of gold coins in the stockings, each for one girl. The next morning, the family discovered the bags of gold coins. The father married his three daughters with the same money with good dowries. When the villagers came to know about the generous help of St. Nicholas, they, too, started hanging stockings by the fireplace of their homes.