Here is the Christmas nativity story, which tells us about the birth of Christ.
Christmas » All Time Favorite Christmas Stories » The Story of the Nativity

The Story of the Nativity

Many years ago in the town of Nazareth lived a young woman called Mary. She was a simple good-hearted lady. One day while she was praying an angel named Gabriel appeared to Mary and told her that God has been kind to her and favored her with a son named Jesus who will be a great ruler and whose kingdom will never end. An angel also visited Mary's fiancé, Joseph, in his dream. The angel told Joseph the news and asked him to look after Mary and the special baby. Mary and Joseph were soon married and they shared a great feast with their family and friends. Joseph was a carpenter and he made lots of wooden toys for the baby. Mary sewed swaddling clothes and blankets for the baby. Soon it was time for the baby to be born, but Jesus was not going to be born at home. A Roman emperor ordered that people must return to their hometown in order to pay their taxes. Joseph came from Bethlehem, which was around seventy miles from Nazareth. Joseph and Mary had to travel to Bethlehem even though the baby was nearly due. Mary packed the things for their journey. They set off for Bethlehem. Mary was able to ride on a donkey. After several days Mary and Joseph reached Bethlehem. The streets were crowded, as many people had come to pay their taxes. There was no place at the inns. Mary was very tired with the journey. A kind innkeeper took pity on Mary and Joseph and showed them his stable and told he can only give them this stable to stay as there was no place in the inn. During the night the baby was born. At this time there were some shepherds who were sitting on the hill top guarding their sheep were informed by angle Gabriel that Jesus was born the Savior of mankind was born this very night in Bethlehem. 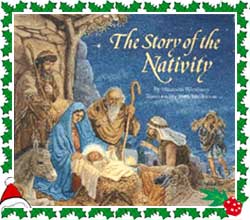 The shepherds were thrilled by the good news. They left their sheep and went into Bethlehem look for the baby. They were guided to the stable by a bright light in the sky. When the shepherds found baby Jesus they knelt down before him in wonder. Many miles away in the East, three wise men saw a shining star. They knew the star was a special sign and they set off to follow it. Caspar, Melchior and Balthazar followed the star for many days. The star led them to Bethlehem. The wise men found Mary and Joseph and the baby Jesus. They knelt in worship and brought gifts of gold, frankincense and myrrh. When the people of Bethlehem saw this they also knelt in worship. The people were filled with joy now that Jesus their Savior was born. Since that day Christians all over the world celebrates this special day as Christmas. At this happy time of year people give thanks to God. Carols are sung in Church. Christmas greetings and gifts are sent to relatives and friends. Houses are decorated with bright, colored lights; sometimes these are hung on an evergreen tree. Families enjoy this day by having dinner with their friends and relatives.