Christmas without Santa Claus is just unimaginable. Here are some facts on Santa's role in Christmas celebration.
Christmas » Santa Claus

Every time we hear of Christmas, one thing that strikes our minds is Santa Claus, apart from other festivities. Santa Claus and Christmas are two sides of one coin; any of them is imperfect without the other. Santa Claus is an imaginative figure in many western countries, who is predominantly identified with his red suit, black belt; ebullient old and fatty appearance who comes riding through the snow on a carriage pulled by reindeers and distributes gifts to children on Christmas Eve as per their wishes. While Christmas is all about sacrifices and helping each other, Santa Claus conveys the same spirits of hope, happiness, love, and faith. Similar to Christmas traditions, Santa Claus is known by different names in various countries. While in Dutch countries, it is referred to as "Sinterklaas", Britain and other European countries call him as Father Christmas. However, the only commonality in all of them is that they all are related to the traditions of Christmas gift-bringers. 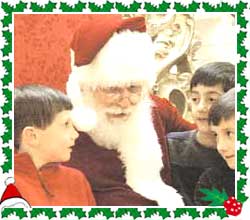 Although Santa Claus is an imaginative figure of Christmas but the only human resemblance to which it is related is Saint Nicolas. As per popular legends and folklores, many people assume that Saint Nicolas was the actual Santa Claus. Saint Nicolas was a 4th century Greek Christian bishop of Myra, a province in Byzantine Anatolia, which presently located in Turkey. He was famous for his generous gifts to the poor and children to make them happy. Later, during the years of Renaissance (19th and 20th century), he became the most celebrated saint in whole of Europe and hence, December 6 was declared as the feast day, Saint Nicolas Day in his honor. Alike other Christmas rituals, there are various traditional rituals related to Santa Claus. The most popular amongst them is the practice of children writing letters to Santa Claus containing a list of desired gifts which they want from him. There are many special features that set Santa Claus distinct from others, the most significant being the portrayal of a particular kind of laughter, "HO! HO! HO! Merry Christmas!"

Commercialization
Whenever we think of Christmas, Santa Claus, a jolly old fat man dressed in red attire with hands full of gifts, instantly comes to our minds. He is the most important emblem of Christmas and its festivities

History
History tells us that the origin of Santa Claus begins in the 4th century with Saint Nicholas, Bishop of Myra, and an area in present day Turkey. By nature St. Nicholas was a generous and honest man, particularly devoted to children. He use to love them a lot.

Legends
Santa Claus is unquestionably a significant symbol of Christmas celebrations. He is widely described as a happy fat old man, dressed in a red suit who rides on a sleigh dragged by reindeers, bringing lots of gifts for children. In fact, he is one of the most adored

Santa Around The World
Christmas and Santa are indisputably inter-linked to each other. Christians do not envisage any Christmas celebration without the existence of gift distributing Santa Claus. He is a mythical character loved by all people of all ages, whether it's a three-year old infant