The image of Santa is different in different places around the world. Here are some facts, which tells us how Santa Claus is visualized worldwide.
Christmas » Santa Claus » Santa Around The World

Santa Around The World

Christmas and Santa are indisputably inter-linked to each other. Christians do not envisage any Christmas celebration without the existence of gift distributing Santa Claus. He is a mythical character loved by all people of all ages, whether it's a three-year old infant or an 80-year old man. As per myths, Santa Claus is an old, white-bearded fat man, with a charming smile on his face, wearing a bright red fur trimmed suit and hands filled with gifts and presents. It is believed that he lives on North Pole with his wife Mrs. Santa and his favorite reindeers that drag his sledge during Christmas tours. Though the concept of Santa Claus is mythical but is mostly related to a 4th century Christian Bishop of Myra, Turkey, named Saint Nicholas. However, the popular figure of Santa Claus came into worldwide existence only in the mid-to-late 19th century. As such, today's Santa Claus is an American adaptation of Santa Claus that was brought into limelight in the 17th century in New York City by adapting the Dutch version, Sinter Klaas. Christmas is all about kindness, happiness, openheartedness, and generous to all. Hence, Santa Claus reflects this spirit truly. Santa Claus is the most popularized name but is known by different names in different countries. In the following write-up, we have listed various significances and names of Santa in different countries. Read on. 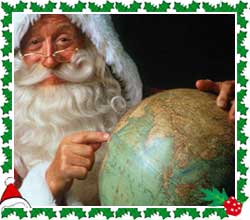 Dutch settlers brought the tradition and importance of Saint Nicholas (Sinter Klaas) to America in the 17th century where some people mispronounced it as Santa Claas which was later popularized as the present 'Santa Claus'. Here, he was transformed from an austere bishop to a jolly old elf. After Dutch brought Saint Nicholas to America, he was gradually transformed from an austere bishop to a fat-bellied jolly man. The credit for the present jolly image of Santa Claus goes to two people, political cartoonist 'Thomas Nast' and poet 'Clement Clarke Moore'.

Germany
In Germany, people celebrate the Santa Claus concept by different names. "Weihnachtsmann" or "Nikolaus" is observed on a small scale who is believed to be Saint Nicholas that fills Children's boots with gifts on December 6 (Saint Nicholas Day). "Christindl" brings and distribute gifts amongst people on Christmas Eve (December 24).

Sweden & Denmark
In Sweden, Santa is referred to as "Jultomten", a gnome whose sleigh is drawn by the Julbocker, the goats of the Thor, the god of thunder. He dresses in red and carries a bulging sack of gifts on his back. However in Denmark, he is known as a gift bringer, named "Julemanden", who also carries a sack stuffed with gifts and is drawn by reindeers.

Netherlands
In Netherlands, St. Nicholas Day evening (Sinterklaasavond) is more important than Christmas. Though some Dutch people have started celebrating Christmas Eve with Santa but "Sinterklaas" (Saint Nicholas) is more important. Sinterklaas distributes gifts on the evening of December 6 and wears a red bishop's dress including red mitre, riding a white horse over rooftops. The traditional Dutch presents include a figurine of Sinterklaas made out of chocolate and wrapped in painted aluminum foil.

Russia
In Russia, Santa Claus is identified as Ded Moroz (Grandfather Frost). However, they celebrate the same ageless vagrant as 'Baboushka'. She was the one who gave the wise men the wrong directions and on the eve of Three Kings Day, she wanders from house to house, peering into the faces of children and leaving gifts.

European Countries
In most European countries, Santa Claus is generally celebrated as Father Christmas. English children wait for Father Christmas, known to their ancestors as Christmas itself. In France, gifts are brought by Father Christmas, Pre Noel, or the Christ Child himself. In Austria and Switzerland, the Christkindl distributes gifts.