Christmas is a holy and blissful day when Jesus Christ was born to Mother Mary in a humble manger in the small town of Bethlehem, more than two thousand years ago. Since then, this day is commemorated as the birth anniversary of Christ, who is also known to be the son of God and creator of Christianity. Therefore, Christmas is the most special and blessed festival celebrated with great enthusiasm and festivity across the world. Christmas is commemorated with different customs and traditions in different countries of the world, though customs and rituals vary according to geographical conditions, ideologies, and communities. However, traditions like Christmas decorations, Christmas tree, Christmas festive dinner, and Christmas gifts are common amongst all nations. 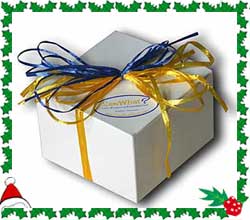 Christmas gifts have become a significant part of Christmas celebrations almost everywhere. Everyone loves to receive gifts and when it is Christmas time, gifts exude a different of charm and magic. Today, Christmas gifts convey a loving and caring feeling that we embed for our loved ones. The tradition of presenting gifts owes its origin to the Magi who came from east of Jerusalem to greet Baby Jesus in the manger with gifts of gold, frankincense, and myrrh. A shining star appeared in the sky over Bethlehem when Jesus was born which guided the Three Wise Men to the small manger where the Christ Child lay.

The Three Wise Men, including Magi recognized Jesus, were going to their savior or Messiah with lots of gifts for him. These gifts were emblematic of tribute, worship and death - of Christ considered as King, God, and sacrificial Victim for the chosen people. However, over time, this historical and religious event became a customary practice. In England, during 17th century, Christianity became popular that resulted in Christmas becoming a public festival and was characterized by festive food, drink, gifts, and caroling. In the Middle Ages, Christmas gifts were mainly reserved for those who were in business relationships but later, the importance of Christmas carnivals and gift giving increased as many monarchs, including Charlemagne, chose Christmas for their coronation.

Later around 19th century, the famous poet, Clement Clarke Moore wrote the ever-popular poem "The Night Before Christmas", which rapidly popularized the Christmas tradition of gift giving across the world. But in America, it came with the introduction of St. Nicholas Day by the early Dutch settlers, which was later popularized by renowned writers and artists who had glorified the gift-giving culture along with the Santa (St. Nicholas). While this was sufficient to popularize the custom of gift giving across the world, people have resorted to various fashionable and trendy gift options to convey their heartiest and lovely feelings and emotions towards their near and dear ones. With Christmas round the corner, do not forget to express your sincere wishes by picking up a decent gift for your family members and friends.