Christmas carols make this harmonious festival all the more melodious. Know more about them in this segment.
Christmas » Christmas Carols

The celebration of the birth of Jesus Christ commences with people singing "Jingle Bells, Jingle Bells" in almost every nook n corner of the world. Further, the lyrics of this Christmas carol stating "Jingle all the way" are quite apt with the advent of Christmas season that brings a wave of happiness all over the world. Surely, Christmas caroling is an integral part of Christmas fęte. Christmas carols are an enthralling custom offering an insight view of Christmas traditions and all the aspects related to it. They have a rich history and have acquired the honor to be a Christmas tradition with time. Today, when a group of devotees sing them with rhythmic voices accompanied by harmonious music in a church, gives an extremely soothing experience. Regardless of age, people love to sing and hymn them. Many churches and communities organize Christmas caroling competitions on Christmas Eve. All those Christmas carols which are quite popular today are amazingly all ancient. Christmas carols are also known as "Noel" and are best to express emotions and stories attached to this holy festival.

The first known Christmas hymn was heard in Rome in around 4th century. 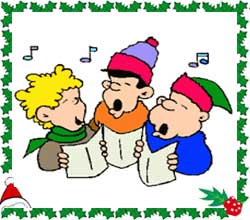 In between 9th and 10th centuries, North European monasteries were introduced with Christmas Prose. It was being developed into an arrangement of rhymed stanzas by Bernard of Clairvaux. Later in the 13th century, some countries such as France, Germany and Italy got influenced by the Francis of Assisi which was basically a robust tradition of several Christmas carols in the native language. In the year 1426, Christmas carol first came out in English language. It were the efforts of John Awdlay who tabulated almost 25 "caroles of Cristemas" which was sung by the group of people popularly called as 'wassails' who used to go door to door and sing Christmas carols. Earlier, these carols were not specifically associated with Christmas and were not even sung in the churches. They achieved popularity after countries experienced reformation and distinction was given to protestant churches. At the same time, reformers like Martin Luther, wrote carols and promote their inclusion in worships.

"O Come all ye faithful" by Adeste Fidelis was observed in the 18th century. The first carols to be published were "God Rest Ye Merry, Gentlemen", "The First Noel", "I Saw Three Ships", and "Hark the Herald Angels Sing" by William B. Sandys in his book "Christmas Carols Ancient and Modern" in 1833. Arthur Sullivan helped greatly in popularizing Christmas carols. Initially, they were mainly tuned on medieval chord patterns. Some of the oldest melodious Christmas carols are "Personent hodie", "Good King Wenceslas", and "The Holly and the Ivy". Gradually, they became a common tradition in Christmas. Today, they are a mandatory part in the celebration of the feast. Also, they are related to both traditional and unspiritual aspects of Christmas.

Away in a Manger
Caroling is one of the best activities during Christmas in which people love to indulge. Weeks before Christmas, schools, church communities, and households start practicing mellifluous Christmas carols to perform on Christmas Eve. While decorating houses and Christmas trees, cooking delicious meals in the kitchen,

I Saw Three Ships
"Christmas isn't a season. It's a feeling." Undoubtedly, feelings can best be described by the medium of music and songs. For the same reason, Christmas caroling today has become the most liked tradition of this feast. With some heart- touching lyrics,

Joy to The World
Have you ever tuned into any radio station during Christmas season? Surely, you will come across that all the radio stations playing million requests of beautiful Christmas carols. Christmas is a joyous time for everyone and celebrating it in a melodious

Jingle Bells
The most famous American Christmas song 'Jingle Bells' was originally written for the purpose of Thanksgiving! A minister called James Pierpoint was the author and composer of Jingle Bells. He composed the song in 1857 mainly for children celebrating his Boston

Silent Night
As we know that originally the Christmas carol 'Silent Night' was a poem written by an Austrian Priest Joseph Mohr in 1816. It is said that on the Christmas Eve of 1818 in the small village of Alpine called oberndorf the organ at St. Nicholas Church had broken.

Famous Christmas Carols
Singing Christmas carols is one of the most popular Christmas traditions. Christmas is a pleasant time for the carolers, who go from door to door singing carols. In return, people given them small presents or serve delicious snacks, both of which delight them. During Christmas season,

History Of Christmas Carols
The history and origin of Christmas carols can be traced back to thousands of years. The concept of carols is thought to have spread from Europe, where they were sung for the first time. However, these songs were not actually Christmas carols.

List Of Christmas Carols
We wish you a Merry Christmas! Without a doubt, this is the first song that strikes our minds on the advent of Christmas. The birth of Lord Jesus Christ showers million cheerful feelings of joy, love, care, affection, fun, excitement, and frolic all over the world.

Christmas Prayers
Christmas prayers invoke the blessings of Jesus Christ on the glorious festival that is celebrated with fun, fervor, and devotion across the world. They are sung prior to Christmas dinner, on the eve of Christmas as well as on Christmas itself. Christmas prayers convey