Santa Claus is associated with Saint Nicholas. This article tells us the idea and concept behind this association.
Christmas » Santa Claus » History Behind Santa Claus

History tells us that the origin of Santa Claus begins in the 4th century with Saint Nicholas, Bishop of Myra, and an area in present day Turkey. By nature St. Nicholas was a generous and honest man, particularly devoted to children. He use to love them a lot. After his death around 340 A.D. he was buried in Myra, but in 1087 Italian sailors purportedly stole his remains and removed them to Bari, Italy, greatly increasing St. Nicholas' popularity throughout Europe. His kindness and reputation for generosity and love for children gave rise to claims he that he could perform miracles and devotion to him increased. St. Nicholas became the patron saint of Russia, where he was famous for his red cape, flowing white beard, and bishop's mitre. In Greece, he is the patron saint of sailors; in France he was the patron of lawyers, and in Belgium the patron of children and travelers. Thousands of churches across Europe were dedicated to him and some time around the 12th century an official church holiday was created in his honor. The Feast of St. Nicholas was celebrated on 6 December and gift giving and charity marked the day. 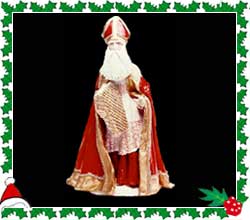 The originally Santa Claus, St. Nicholas, was born in Turkey in the 4th century. He was very pious from an early age, devoting his life to Christianity. He became widely known for his generosity for the poor. But the Romans held him in contempt. He was imprisoned and tortured. But when Constantine became emperor of Rome, he allowed Nicholas to go free. Constantine became a Christian and convened the Council of Nicaea in 325. Nicholas was a delegate to the council. He is especially noted for his love of children and for his generosity. He is the patron saint of sailors, Sicily, Greece, and Russia. He is also, of course, the patron saint of children. The Dutch kept the legend of St. Nicholas alive. In 16th century Holland, Dutch children would place their wooden shoes by the hearth in hopes that they would be filled with a treat. The Dutch spelled St. Nicholas as Sint Nikolaas, which later became Sinterklaas, and finally, in Anglican, to Santa Claus. In 1822, Clement C. Moore composed his famous poem, 'A Visit from St. Nick,' which was later published as 'The Night Before Christmas.' Moore is the person behind creating the modern image of Santa Claus as a jolly fat man in a red suit. Still today also we visualize the same image of Santa Claus.