The celebration of Christmas is mainly associated with the Christians. It is regarded as a Christian holiday that celebrates the birth of Jesus Christ but surprisingly no one knows the actual date of Christ's birth, but most Christian observes Christmas on 25th December. According to the Christian calendar it is the most important festival. Though it is celebrated worldwide but each place has a way of its own to celebrate it. Irrespective of the way it is celebrated the significance and the reason behind its celebration remains the same through out the world. The variation in the traditions and cultures of the countries gave birth to the variant styles of celebration. Today the way Christmas is celebrated worldwide is mainly due to commercialization, which has taken place in each and everything. While most of the Western world associates this festival with Santa Claus and gift giving and family get together, fun and enjoyment but there are still a number of people who consider it as festival, which signifies all about Jesus his message, his preaching and his mission. 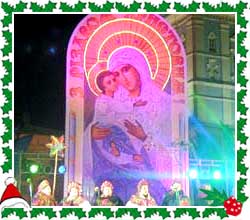 For most Christians, the Christmas season begins on the Sunday nearest 30th November. This date is regarded as the feast day of Saint Andrew, one of the twelve apostles of Christ. The nearest Sunday is the first day of Advent, which means coming and refers to the coming of Christmas festival. It's a four-week period during which Christians prepare for the celebration of Christmas. Many Christians have an Advent wreath in their homes during the holiday season. To keep track of the 24 days before Christmas in many countries, people use special Advent calendars or Advent candles. The Christmas season reaches a climax at midnight Mass or other religious services on Christmas Eve. Churches are decorated with candles, lights, evergreen branches, and bright red poinsettias. People sing Christmas carols and listen to readings from the Gospels of Saint Luke and Saint Matthew. Priests and ministers speak to the congregations about the coming of Christ and the need for peace and understanding among all people.

Most churches also hold services on Christmas Day. This is mostly the universal way Christmas is celebrated around the world. Only the ways which may differ from place to place. In most of the places the Christmas season ends on Epiphany, 6th January. Mostly in the Western Christian churches, Epiphany celebrates the coming of the Wise Men to the Christ child. Among the Eastern Christians, this day celebrates Jesus's baptism. The 12th day after Christmas is known as Epiphany. The song 'The Twelve Days of Christmas' refers to those twelve days between Christmas and Epiphany.