Here are the facts behind the story of Rudolph- the red nosed reindeer.
Christmas » All Time Favorite Christmas Stories » Rudolph- The Red Nosed Reindeer

Rudolph, the red nosed reindeer, is one of the most famous and traditional Christmas stories. Rudolph was a character created for Chicago-based Montgomery Ward (group of department stores) and was an advertising gimmick. In 1939, the employers of these department stores asked their copywriter Robert L. May to write a story. When May came up with the story and handed over to the company, it became an immediate hit and sold over 2.4 million copies in just one year. And gradually, the story of Rudolph became popular in every house of the country. The story talked of a reindeer named Rudolph, the only reindeer in the world with a big red nose. This big red nose gave him the name of Rudolph - The Red Nosed Reindeer. Rudolph was very embarrassed of his big nose. Other reindeers use to have a good laugh over him. Eventually, his father and mother also started feeling ashamed of him. And in no time, Rudolph started hating himself for being so ugly. 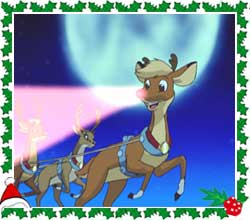 On one Christmas Eve, Santa Claus was taking his yearly world trip with his team of husky reindeers. The whole reindeer community gathered to cheer their great heroes. But on the way Santa was hit by a terrible fog. The fog was so thick that Santa couldn't see any chimneys. At that time, Rudolph arrived with his glowing red nose. Santa at once sensed the solution of his problem; he led Rudolph to the front of sleigh, fastened the harness, and climbed in. With the help of Rudolph's glowing red nose, they easily cleared through thick mist and fog. Thereafter, Rudolph became one of the most famous and beloved reindeers in the community. The big red nose which was earlier a reason for his embarrassment and shame ultimately turned into a reason of his heroism.