Holly flowers add good luck, air of celebration and protection all around. Know more about this marvelous holly in the lines below.
Christmas » Christmas Flowers » Holly

"The earth laughs in flowers", this famous adage quoted by Ralph Waldo Emerson seems to be so veracious. And why not, in every circumstances of life, flowers remain a constant friend of humans. Therefore, they are associated with every happiness and celebration of humankind. All festivals have a special and exclusive legacy for flowers. Their ultimate fragrance elevates the joyous mood of the feast. Christmas shares the same importance when it comes to flowers. There are various flowers associated with Christmas. They play an important role in the decoration of Christmas holidays. One of the most popular flowers is the holly flower, which is largely used for making Christmas wreaths. Holly flowers are beautiful with eye-soothing prickly green leaves that are historically connected with this wonderful festival. There are various species of holly tree. Holly is available in almost all sizes and shapes. Amazingly, based on the characters of different holly, in some countries, they are characterized as "he holly" and "she holly". The "he holly" has prickly leaves whereas the "she holly" has smooth surfaced leaves. 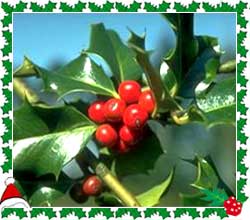 Holly flowers are not only restricted to Christmas only, they are quite symbolic to Romans and Muslims also. Holly flowers are assumed to bring good luck and good times. They give ultimate glee and showcase numerous emotions, like love, friendship, kindness, and affections. Although their roots lie in Northern Europe, the holiness of these flowers is believed to have originated from pagan. It is said that holly was the holy plant of Saturn where the Romans proposed these flowers during Saturnalia feast to Saturn. The Romans used to ornament the image of Saturn and exchange the wreaths of these flowers with each other. The history suggests that in order to stay away from bad treatments, people brought these flowers to spread good fortune all around. Gradually with passing years, holly became a strong symbol of Christmas and its origin faded away. Christians also believe that holly carries a divine magical power with them. Therefore, decorating the house with these flowers keep the house protected from evil spirits. Today, people love to hang them on doors, windows, etc. in the shape of wreaths.

We all know that Lord Jesus Christ was compelled to ornament his head with a crown, the leaves of the holly are said to connote that crown of thorns. Apart from the use in Christmas decorations, interestingly, these flowers play a vital role in garnishing of food and drinks sometimes. One can put its leaves to top of the plum pudding flamed with brandy. It is an awesome way to finale the dining of Christmas. Now that you know all about the wellness of these alluring and beautiful flowers, do not forget to adorn your house with holly this coming Christmas.