Santa Claus is unquestionably a significant symbol of Christmas celebrations. He is widely described as a happy fat old man, dressed in a red suit who rides on a sleigh dragged by reindeers, bringing lots of gifts for children. In fact, he is one of the most adored characters by people of various ages, whether kids or oldies. As per Christmas traditions, kids hang their stockings on and near the fireplace. It is believed that Santa travels to each and every home on Christmas Eve through the chimneys (above fireplace) and fills the stockings with gifts. Similar to Christmas, there are many legends related to Santa Claus. People also believe that Santa Claus lives at North Pole along with Mrs. Claus and his reindeer (who drags his sledge). Santa's wonder workshop is commonly referred to as "Santa's Grotto". Santa personally molds all the delightful Christmas gifts that he distributes over Christmas. 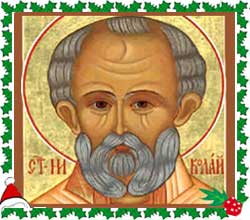 There are many popular legends that link Santa Claus with a real human being. The most relevant theory to Santa Claus's existence is related to the 4th bishop named Saint Nicholas. This Christian saint used to live in Myra of Lycia that is presently located in Turkey. He was wise man, kind and munificent in nature, who used to help poor people and kids by presenting them gifts. In fact, the gift giving tradition actually came from the generous nature of Saint Nicolas. It is believed that Santa Claus gave gold coins to a pious Christian for the three impoverished daughters by throwing gold coins from the chimney so that they would not have to become prostitutes to earn money for their dowry. Saint Nicolas is one of the most remembered and revered saints amongst Catholic and Orthodox Christians. It is believed that this holy Saint died on December 6 in 324 A.D. Christians celebrate Saint Nicolas Day on December 6 in his honor.

Saint Nicolas earned fame for his good deeds in the middle ages between 19th and 20th centuries, and became the most celebrated saint in Europe. The legend of this generous saint was brought to the New World by Dutch settlers, and the name Santa Claus evolved from the Dutch nickname, Sinter Klaas, a shortened form of Sint Nikolaas. The saint became a part of local lore when John Pintard founded the New York Historical Society in 1804 and made St. Nicholas the patron saint of the society and New York City. However, the modern portrayal of Santa Claus with fur-trimmed red attire, fatty belly tucked up by black belt, milky white beard, black boots, and hands full of gifts and presents owes its popularity to two people - political cartoonist 'Thomas Nast' and poet 'Clement Clarke Moore'. However, this evolution from Saint Nicholas to the image of today's Santa took a long period of time.

In the poem 'The Night Before Christmas', poet 'Clement Clarke Moore' gave a short description of modern day Santa Claus as

"That was the night before Christmas, when all through the house
Not a creature was stirring, not even a mouse;
The stockings were hung by the chimney with care,
In hopes that St. Nicholas soon would be there;
The children were nestled all snug in their beds,
While visions of sugar-plums danced in their heads;
And mamma in her 'kerchief, and I in my cap,
Had just settled down for a long winter's nap,
When out on the lawn there arose such a clatter,
I sprang from the bed to see what the matter.....was

He spoke not a word, but went straight to his work,
And filled all the stockings; then turned with a jerk,
And laying his finger aside of his nose,
And giving a nod, up the chimney he rose;
He sprang to his sleigh, to his team gave a whistle,
And away they all flew like the down of a thistle.
But I heard him exclaim, ere he drove out of sight,
"Happy Christmas to all, and to all a good-night!"

Well-known painter Thomas Nast gave the visual version of modern day Santa inspired by this poem as the picture illustrated below.