Whenever we think of Christmas, Santa Claus, a jolly old fat man dressed in red attire with hands full of gifts, instantly comes to our minds. He is the most important emblem of Christmas and its festivities all around. Though Santa Claus is an imaginary character, but many people relate his habits and acts to Saint Nicholas. Saint Nicholas was a 4th century bishop of Myra (now in Turkey) who was known for leaving gifts in the shoes and stockings of the poor. He was killed by a Roman Emperor in around 350 A.D. on December 6. Since then, the day is celebrated as Saint Nicolas Day in many European countries. Legend has it that Dutch settlers took this jolly concept and tradition of Sinter klaas to Amsterdam, which is now Manhattan. In fact, this was the time when Saint Nicholas or Sinter Klaas transformed into Santa Claus as well as his modern picturization in red attire. 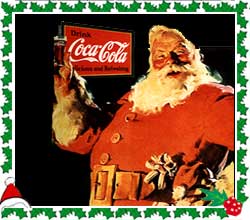 In the modern age, all Christmas related things, like greeting cards, figurines, toys, Christmas decorations, and many other symbols express Santa Claus in the same jolly, white beard, and red suited man. What started as a fun concept gained high recognition and got commercialized over the years. It is a known fact that Coca-Cola Company had a huge influence on the commercialization of happy Saint Nicholas or Sinter Klaas into today's highly popularized holiday figure. Let us see the main events which became the milestones during the process.

In the early 19th century
It is believed that Saint Nicholas's fame spread rapidly during the middle ages around the world, especially to America. In between 1822-33, the popularity of Saint Nicholas or Sinter Klaas took hype and then, an eminent poet and professor, Dr. Clement Clarke Moore wrote a poem giving the description and holy deeds of Santa Claus in his poem "A Visit for St. Nicholas" which was later popularized as "The Night Before Christmas". However, in 1863, a popular German cartoonist and painter, Thomas Nast drafted Santa Claus's image according to the poem. It was he who gave Christians the image of an old elf bearing the red coat with white fur lining.

1931, Coca-Cola Advertising Campaign
From Thomas Nast's portrayal of Santa Claus, popular illustrators continued to portray Santa in numerous ways. However, this image did not appear in the main stream until 1931, when artist Haddon Sundblom created the iconic and happy image of Santa Claus for a Coca-Coal advertising campaign. The Coca-Cola Company wished to encourage consumers to think of their product as a year-round drink using the tagline "Thirst Knows No Season". Coca-Cola advertisements showed Santa Claus in the midst of delivering toys, taking a pause to read a letter, enjoying a Coke, and looting the refrigerator in a couple homes in search of this popular soft drink. This version of Santa advertising is still used by Coca-Cola during Christmas season. This advertising campaign gave St. Nicholas a new identity and popularity, thereby making him popular with their drinks.