Candle signifies different believe in different religion. This article tells you what it signifies when it comes to Christmas celebration.
Christmas » Christmas Symbols » Candles

Lighting candles is a custom of many religions for many different reasons. But when it comes to Christmas, many feel that the candles are symbolic of the Light from the heaven it signifies the sun's light and warmth in the middle of dark winters especially during Winter Solstice (21st or 22nd December). Candles signify love, prayer, passion and hope. Christians see candles as 'Christ's Light' and the lighting of candles on Christmas Eve comes from the Jewish 'Feast of Lights' or Hanukkah. Christmas candles are found in all shapes, colors, sizes and scents. On the Advent wreath, a candle is lit each week to remind us of the coming of Christ or the ray of hope. Candlelight represents Jesus who is the light of the world and who guides us from all the darkness of the world. The light signifies the path of life. The candle represents spirituality, devotion, faith, longing, and the life devoted to a single, generally spiritual passion or aspiration. It symbolizes the passing years of a human life as it slowly melts away. Because of their phallic shape, candles were commonly used in marriage and fertility rites. In these rites they may represent the innocence of virgins. It was customary during the middle age to light one large candle on the Christmas Eve both at church and at home to represent the star of Bethlehem. It was said that the candle represents the newborn Christ. 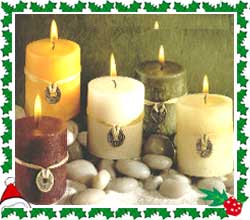 In Scandinavian countries, keeping the Yule Candle burning was very important. In Scotland, it was believed that if the Christmas candle finishes before midnight, it meant a great disaster would happen to the family. In Ireland, people use to make their candles so very big that the candleholders have to be carved out of large turnips to be used as candlesticks. Candles symbolize the image of Christ, His purity, and the salvation He offers humanity. As Jesus symbolizes 'the Light of the World.' Similarly the flame of the candle represents His divine or spiritual nature and the candle symbolizes His human or fleshy nature. Two candles may also be used to represent His dual nature. Candles are mainly used at Christmas time to welcome the Christ Child or Christ kind and as a symbol of the star of the Magi. Three candles symbolize the Trinity. The Jews celebrate the festival of Hanukkah or festival of Lights, which is celebrated on the eight days prior to Christmas. It began in 165 B.C. when the Maccabees once again captured Jerusalem. After they completed the purification of the temple, they found they had only enough of the sacred oil to keep the menorah lit for one day but miraculously, the oil lasted eight days. Since then, a nine-branched candelabrum has been used to commemorate this event each year.