The symbol of Star has a special significance in the celebration of Christmas. Here are some legends associated with Christmas Star.
Christmas » Christmas Symbols » Star

To most of the Christians the Christmas star symbolizes Jesus Christ, who is referred to as 'the bright and morning star'. In ancient religions the stars always held high and important position even before Christmas. Several myths and legends were associated with stars as ancient people use to look upon stars as gods and created myths about them. The star symbolizes the holy star that appeared quite miraculously in the eastern sky the day Jesus Christ was born. It is believed to have shown the way to the magi, who were the three wise men from the East to find the newborn king. People still wonders whether the star that shined that fateful night is any different from those of today. The magi from the east were also astrologers of their time. They had studied the Jewish rabbis and were well aware of the triangle shape that had already appeared before the birth of Moses. This was perhaps the reason why it was interpreted that a great man was to be born on the Jewish land. 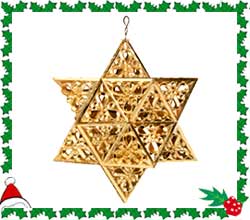 Stars symbolize great multitudes, heavenly favor, wisdom, guides, watchers, and aspirations. The star stands for high hopes and ideals, a hope for a good fortune and to reach above oneself. It is believed that a miracle had occurred at the time of his birth. The Christmas star continues to adorn the churches and houses as part of the traditional Christmas celebrations. In many cultures, stars are believed to be the souls of the dead. In Christian believes, stars are identified with the angels. In other parts of the world, stars are associated with the eyes or windows of heavenly beings. The North or Pole Star is considered the navel of the universe and the gate of heaven. Some believe it to be the very throne of God offering hope and direction to those lost in the darkness of this world. The brightness of the stars is associated with the light of Christ, which shines even in the darkness. It is the light, which guides and shows us the right path to travel in life. The brightness of the star is the symbol of enlightenment and victory of good over evil.