Yule Log plays a vital role in the celebration of Christmas. This article will tell you about its origin, importance, customs and significance as a Christmas symbol.
Christmas » Christmas Symbols » Yule Log

Yule log plays a vital role in the celebration of Christmas. It is said that Yule Log was taken from ancient Sun worship rituals. Yule Logs are supposed to be cut from red oak trees There is a custom that on the Eve of Christmas a huge log of freshly cut wood called the Yule log would be fetched and carried to the house with great ceremony and after that it would be burned all of the Christmas Eve and into Christmas Day by the master of the house. In some families, the young girls of the house lit the log with splinters from the preceding year, which they had carefully tucked away. In other families, the mother had this privilege. It is believed that the cinder of the log protects the house from lightning and the malevolent powers of the devil. Regarding the choices about the variety of wood and the rituals related with the burning vary from region to region. This custom of burning the Yule log began long ago in Scandinavia. Where there is a custom of burning a huge log once a year in honor of their god Thor. Afterwards the Christians, made the Yule log an important part of Christmas celebration. Later the word Yule came to mean Christmas. In some countries lively and elaborate ceremonies accompanied the custom of dragging the great log into the house. It was considered good luck to keep an unburned part of the log to light the next year's Yule log. The unburned part was believed to protect the home from lightning and fire during the year.
. 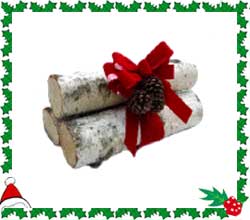 Today also the custom of burning a special log on Christmas Eve is followed. People decorate the log with ribbons or bows. Some people use decorated logs as table centerpieces, often with candles that can be burned instead of the log. According to legends Yule Log was considered as the magical source of fuel for the sun, and therefore symbolized the sun's light, warmth, and life-giving power. It is also referred to as the ale drink in the ancient period. After the Christians adopted the Yule Log as a part of their Christmas celebration it became customary to place it on the hearth on Christmas Eve It is kept burning till the next day, the warmth and the glow enhances the atmosphere of the festival. Some rules must be followed while performing the ritual. They are it is never purchased it has to be received as a gift. It had to be kindled with a fragment of the previous year's log, which had been specially preserved for this purpose, and its fire is never to be permitted to go out by itself.