Just like Asia the celebration of Christmas, as a festival is not so widespread because of small Christian population in most of the countries. The missionaries brought the Christmas customs and traditions to Africa so the Christian communities mainly follow the Western traditions and rituals. However the African sings carols and hymns in their own languages. Christmas day begins with groups of carolers walking to and fro through the village, along the roadway, by the houses of the missionaries, singing the lovely carols known the world around. Often people may be awakened by a group of carolers beginning to converge on the house of worship. They return home to make final preparation as to the clothes one must wear and also as to his offering for the Christmas service. Christmas in South Africa is a summer holiday. In December, the southern summer brings glorious days of sunshine that carry an irresistible invitation to the beaches, the rivers, and the shaded mountain slopes. Then the South African holiday season reaches its height. Varied range of flowers can be found there. 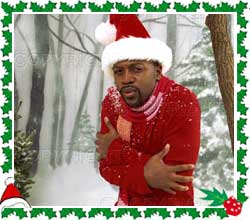 Homes are decorated with pine branches and Christmas fir at the corner. Children also hang up their stockings for presents from Santa Claus. Many South Africans prefers to have Christmas dinner in the open-air lunch. For others, it is the traditional dinner of either turkey, roast beef, mince pies, or suckling pig, yellow rice with raisins, vegetables, and plum pudding, crackers, paper hats, and all. In place like Ghana most churches herald the coming of Christmas by decorating the churches and homes four weeks before Christmas. On the eve of Christmas Children march down the street singing Christmas carol in their language. Everyone goes to the church, which have been decorated with Christmas evergreen or palm trees massed with candles. Hymns are sung and plays in native languages are presented. On the Christmas day children and older people go from house to house caroling all the way. Later on there is a feast of rice and yam paste called fufu with stew or okra soup, porridge and meats. Families get together eat with their close friends, relatives and neighbors and they also exchange present among each other. In Ethiopia the Ethiopian Orthodox Church hold religious services on the Christmas but the main celebration takes place nearly two weeks later at Epiphany.