As compared to the other parts of the world Asian countries have relatively small numbers of Christians living there. So Christmas is not so widely celebrated there. Places where Christmas is observed people mostly follow Western customs and traditions such as attending the midnight Mass, religious services, exchanging of gifts, thanksgiving, singing carols, decorating their house and Christmas trees. In country like Japan, Christians are a minority, yet the festival of Christmas is increasingly becoming popular. Streets are decorated with lights, gifts are exchanged, and Christmas trees are sold at each departmental store. Even Santa Claus makes his appearance in the crowded stores and distributes gifts among people. Which are celebrated on early morning the nine days before Christmas. On Christmas Eve, Filipinos parade through the streets carrying colorful star-shaped lanterns called parols. These lanterns are also displayed in the windows of most homes. On the Christmas Eve, Christians from around the world gather for midnight Mass in Bethlehem, which is believed to be the birthplace of Jesus, it's the town near Jerusalem. They kneel to kiss the Silver Star that is set in the ground at the place where Jesus' have born. In places like Indonesia and Thailand where Christian population is comparatively low but still it is well celebrated there. 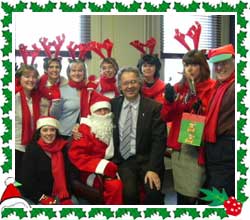 In Thailand less than 1% of the population is Christian there are small churches in some of the cities but they don't decorate the streets and shopping malls for this occasion. Place like Hong Kong celebrates Christmas in a big way, as there are Christians of most denominations. Here Santa Claus is known as Lan Khoong or Dun Che Lao Ren with his reindeer. Christmas celebration in Papua New Guinea is almost the same way it is celebrated in Australia. In Vietnam on the Eve of Christmas the Christians would attend a midnight Mass. After the rituals people would return to their homes for the most important meal the Christmas supper. The food usually consists of chicken soup and for the wealthy people it consists of turkey and Christmas pudding. They mainly follow the European customs and traditions and the concepts of Christmas tree and Santa Claus is quite popular among people. In Philippines Christianity is the religion chosen by the people. Here Christmas celebration starts nine days before Christmas with a mass known as Misa de Gallo. Mass is held hourly on Christmas Day so that everyone can attend. In India Christmas is celebrated all over the country. In South India mostly Christians are found there they put small clay lamps on rooftops and wall of their houses at Christmas. Everybody goes for midnight Mass and the churches are decorated with beautiful poinsettia. They give presents to family members, friends and even to orphan age, charity and to poor people.