The festive month of December comes in Australia with the warmth of summer because it is often very hot in Christmas. Here Christmas is celebrated along traditional lines. People normally attend great mass in church on the Christmas Day. The church often held services early in the morning. For Christmas dinner the Australian prefers to go out for a picnic in the wood or on the beach. They decorate their homes with flowers and other plants and also sing carols by candlelight. The carols, which are sung, are mostly Australian. Since it is a cosmopolitan place so Australian Christmas food can vary but meals mainly center around the traditional hams, turkeys and plum pudding. Since the climate is hot so salads and other summer foods are quite popular even dishes from other cultures are also common. Lots of events and concerts are held through out the country. The Australian like to spend their Christmas Day staying out either by going out with family for a picnic or if they are at home they like to spend that day either by swimming in a pool, playing cricket at the backyard or any other outdoor activities. 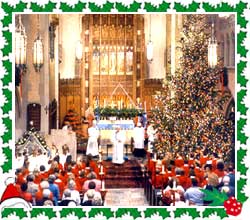 The climatic condition allows the Australian ton enjoy a tradition which started around 1937. Every year on the Christmas Eve carols by candlelight is held where thousands of people gather in the city of Melbourne to sing their favorite Christmas carol. For the occasion of Christmas the Australian decorates their home with Christmas Bush, a native plant with little red flowered leaves. It is a common site to see Santa Claus on the streets even he can be seen on a surfboard. Public celebrations include carols by Candlelight Concert, on Christmas Eve. This event is aired live on television and radio throughout the country. Other than this various other events are also organized throughout the country where common people can take part as a Christmas celebration. Plays are also enacted on stories based on Christmas and the birth of Jesus Christ.