The United States of America is a vast country with people staying from different ethnic groups. So the way Christmas is celebrated not only varies from state to state but also from house to house. The Jewish people celebrate Hanukkah rather than the Christian celebration of Christmas as large part of population consists of Jewish people. Christmas in Virginia is celebrated in a similar fashion as it is celebrated in rest of the United States. All the streets and stores are beautifully decorated with colorful lights and Christmas trees and Santa Claus. Christmas carols are played all the time. Most of the shopping malls and departmental stores are decorated with Christmas artifacts to give a festive look. The shopping centers have beautifully decorated Santa village. The grocery shops sell those items, which you need for Christmas dinner like turkeys, hams, candies, cookies and candies. In Arizona since they don't have big trees to decorate as Christmas trees so they decorate the cactus and the palm trees. The day after Christmas they have a big shopping festival because they have big sales and people return some of their Christmas gifts. Schools are generally closed till 2nd January. 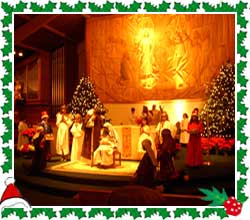 In parts of Alaska most Christian Celebrates Christmas on 25th December, just as people do in other parts of the world. As a part of the celebration you can see arrival of Santa Claus with gifts on the streets of Texas and Wisconsin. Food, gift giving, decorations and carols are some of the common features, which can be seen in every household. Everyone sings carols and at the end of it the host provides carolers with maple-frosted doughnuts, cookies, candy, piruk/, or fish pie, and sometimes smoked salmon. In different parts of America the Christmas celebration is more or les similar. In some provinces, the Eskimos, with dancing and a present-giving party celebrate a big winter festival, called Sinck tuck. In Labrador, turnips are saved from the summer harvest and are given to children, with a lighted candle pushed into a hollowed out hole. Similarly in Nova Scotia, songs and carols brought from Britain two centuries ago are sung on each Christmas morning. Whereas in Arizona they follow the Mexican traditions called Las Posadas. Where families play out the parts of Mary and Joseph searching for somewhere to stay. They go out in procession and visit their friends' and relatives' homes where they praise and admire each family's Nativity crib. In parts of New Mexico, people place lighted candles in paper bags filled with sand on streets and rooftops to light the way for the Christ Child. The traditional Christmas dinner in America is roasted turkey with vegetables and sauces and for dessert they prefer to have rich, fruity Christmas pudding with brandy sauce. Mince pies, pastry cases filled with a mixture of chopped dried fruit is also taken as Christmas desserts. Most of the Americans celebrate Christmas by exchanging gifts and greetings and by visiting each other's family. The homes are decorated with branches of trees, mistletoe, and holly. Most have a Christmas tree hung with electric lights, tinsel, baubles, and strings of popcorn and candy canes.