In South America Christmas is celebrated mostly as a Harvest festival. The Native Bolivians celebrate Christmas mainly like this. They thank each other for the completion of a year's work. The festival tends to become a feast of adoration of the Goddess Mother Earth, they pray to her for their well being and prosperity and to bring a fruitful harvest in the coming year. In Brazil Santa Claus is not so popular but those who know they call him by the name of Papa Noel.

The children are not so familiar with Christmas trees, but they do have a crèche or Presepio, representing the Christ's birth. Gifts and toys are exchanged during the holiday season after which the Presepio is put away until the following Christmas. In Ecuador the children write letters to the Christ-child and place shoes in the window in which he may place toys as he passes by on Christmas Eve. Noise-making toys are common and are used with much energy on the streets on Christmas morning. It has a warm climatic condition so most of the celebrations are in the streets. There are firecrackers, brass bands, and dancing. At midnight everyone goes for Mass after which they enjoy dinner with family. In Columbia, 90% of population is Roman Catholic so the Christian aspect of Christmas is mostly celebrated. City streets and parks are illuminated with lights giving a festive look to the city. 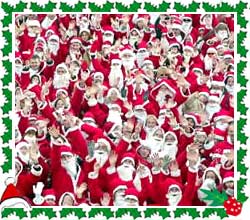 Places like Argentina, Venezuela, Uruguay more or less has a similar kind of Christmas celebration. Most of the Christmas customs are similar to that of USA and UK. As most Latin American nations, Chile's Christmas celebration centers on the church and the family. The Catholics here observe nine days of prayer and fasting before Christmas called the novena. The menu for the dinner on the Christmas day consists of turkey, seafood and an array of salads, and olives, accompanied by the local wine, for which Chile is famous. The deserts always include Pan de Pascua, a sweet Christmas bread, along with fruit, cake and cookies. In Argentina people go to church with family and after that they have a family get together. The dinner consists of pork, turkey, chicken and a great variety of meals. People also have sweet items, cider, beer and juice for the occasion. Houses are decorated with red and white garlands. The Christmas trees are decorated with colored lights, ornaments and Father Christmas placed on top of it. Venezuela also celebrates Christmas with similar enthusiasm and grandeur. On 16th December families bring out their pesebres, which is a specially designed, and thought out depiction of the nativity scene.